Sprinkling css into an application is a lot like configuring the Environment Variables of your app to render correctly on the client side. Setting up the environment on the client side is also about understanding the context of fronted design that one must accept while filling the viewport with their app.

Toucaan makes it easy to conceptualize, configure, and deliver a fully realized browser environment from one place in your project.

The first soft layer of setting up environment variables for your application is handling vendor inconsistencies up and close.

Traditionally, applications have required injecting a fairly heavy reset, reboot, or normalize css file before other application styles could be included. Toucaan does not use this strategy.

Toucaan uses the baseline method instead.

A to-do app will likely not require the block of normalization code meant for the video tag, for example. One could shed unused css programmatically at the build stage, but such a set up often leads to dead code within the project.

Open the env folder inside toucaan submodule to reveal its contents: 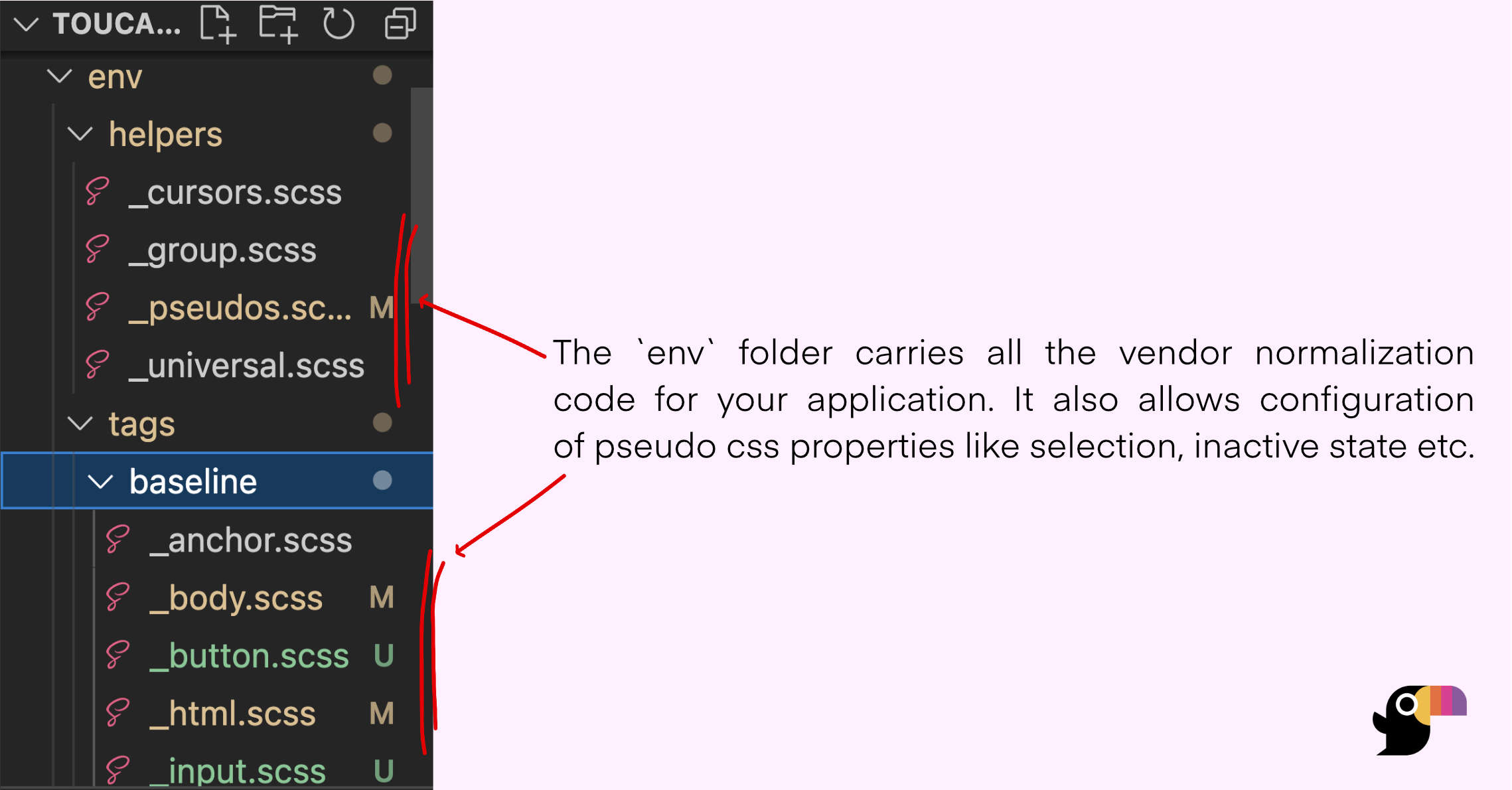 Inside the env folder you'll find two subfolders named helpers and tags each carrying a few initial defaults. Only a few baseline tags and pseudo-classes are included in the environment by default but you can add more into the context as needed.

The env must be customized according to the actual HTML vocabulary of your app.

This is how the environment for a desktop browser is reset:

Take a look at the desktop.scss file to see a real desktop reset followed by the space for application styles to be written by you.

A desktop displays along the landscape-axis of intrinsic design, whereas a mobile on the portrait-axis.

Since most developers and designers like to work on a desktop, Toucaan recommends to configure the desktop environment first. Not mobile or mobile-first!

A part of the configuration options provided in the _config.scss file (see the last chapter) are also environment properties.

Here are some of the things for you to configure:

The key here is to break it down into small piece and config the framework as you go on to build intrinsic UX/UI for each device category that you end up supporting for your users. Contextualize properties like touch-action: auto and pointer: coarse according to the need of the medium and move them out of the way from environments that do not require those.

Go to the next chapter on Intrinsic Typography.